At some point in the recent past I blinked and suddenly here you are, nearly 15 and a half months old. If I had the power to keep you this age for more than a month I certainly would. Simply put you're a damn hoot.

You still really love dogs and Lady Gaga, but I think you now love smoothies even more. We let you have your first one a couple of weeks back when you were really sick (reaction to the evil MMR) in a desperate attempt to get something/anything into you. But really if can be sucked through a straw you're down. Your brother still won't drink soda, even Yoda soda, but you've gotten your mittens on my Diet Coke more than once and thought it was awesome. Heidi 2004 would be shocked and horrified at all the things you've ingested thus far.

With food you are far pickier. Your absolute never refused favorites are guacamole, bananas, bean beans, yogurt and soup. Savory lentil, minestrone, veggie, tomato, carrot, and clam chowder - you love them ALL. You adore grilled chicken and tofu 90% of the time. The other 10% you're right, we are totally trying to kill you. You're down with eating raw onions for funsies just like your mother, and you'll also inhale pico as an entree like the native New Mexican you are.

Size-wise you're petite. (18lbs, 11oz and 29 inches) Throw in your short hair and you wow complete strangers everywhere we go because you look way too small to be walking, running and talking as well as you do. Currently most people peg you at 9 months, even parents with kids around that age. You just moved into a size 4 shoe, or as you call them FOOFS! which leads me to believe your feet might be bigger than the rest of you just like your big brother. It's really hard to find pants that fit so I continue to put you mostly in dresses, which you now seem to prefer. The last few times we've put you in jeans has elicited a "what the hell?!" reaction. Your hair is still far too fine for barrettes, but you love soft headbands and floral tiaras. You have this divaesque "I know I look good!" beam that's priceless when your head is adorned.

You are still a sleeper. You go to bed around 7:30p, sleep until 8:30-9a, eat like a madwoman for 45 minutes, and then go back down until 11:30-noon. Later in the afternoon I can count on at least another full hour, more often than not two if we are at home, other wise you cat nap while we're out. At night, if you decide we're taking too long getting you to bed you actually start waving goodbye, the first part of your bedtime routine. It's a big hit when we have friends over. 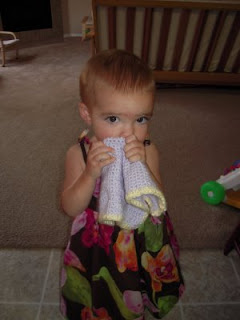 When you're tired and you have your beloved blankie you suck your left thumb. I had a bunch of waffle blankies that you liked just fine until your grandma, my mom, gave you one she had knit especially for you, and then it was all over. She spent months making it a twin, in part because of the oh shit what if it was ever lost factor, and in part because you're never awake long enough for me to wash and dry it between naps. Three weeks ago it was finally finished and ready for you, along with a more portably-sized sibling I named the potholder. We were all worried that you may not accept a newer, slightly larger, and less smellier version of blankie but you surprised us by nearly exploding with happiness. Of course now there are times when only the entire collection will do. Since it was such a hit your grandma has made two more potholders, which you also welcomed to your collection with love. You seemed to realize instantly that potholders + walking = the end of blankie tripping. Smart girl.

At least a hundred times a day you grab my finger and pull me to the computer demanding DUCKS!

You call your big brother Gah. When he gets in your way you do not hesitate to give him a good shove or five. Your father and I will never forget our last plane ride, when we had boarded and were waiting at the gate and you realized that your brother's window seat had some good viewing. Your ineffectual little fists, shrieks of "Gah! Gah! Gah!" and steam blowing out your ears -- something only a mother, or father, could love. And you have this new smile, one that uses your whole face and jutts out your chin. I'm still trying to catch it on camera. Something about it really reminds me of my own dad.

I could go on for days. You will never know how much we love you. Thank you for being just who you are.

Wow, Heidi. That was incredibly touching. You make me want to rush home and give Ellie a huge hug!

I love the sentiment behind your words. Your kids are both very lucky to have you and J as parents.

Thanks for sharing this. I'm going to go get a tissue now.

What a beautiful post! I'm so glad to see you back, I've been worried about you ;) Your little girl is just so cute. I am loving this age as well, Brooklyn just turned 14 months and she's hilarious! Hope you're all doing well.

Ps. Finally working on a dress with the monkey fabric I bought at HIp Stitch...

Thanks gals! Can you tell I'm in love?

Katelyn, so glad you found something at Hip Stitch! I know exactly what fabric you're talking about. Love it! If you sign up for their e-newletter you get a coupon once a month good on fabric or patterns, usually 30%.

I like the Elmo and Ducks song.. it's stuck in my head now. No wonder she loves it!!

Thanks, Heidi! I do get the online newsletter, I'll have to go back once I'm done with this dress. Now if only the baby would take a nap!